Kali
Remy Presas, The Grand Master of Modern Arnis, explained the origin of the word “Kali”. He
pointed out that in 200 B.C. The Malays migrated to the islands bringing with them their long bladed
weapons called Kali. This word may have been a contraction of Tjakalel, the name of a form of
fencing native to Indonesia.
The Madjapajit and Sri Vishayan empires are said to have had spheres of influence that extended
to The Philippines. According to tradition, 10 Borrean Datus (chieftains) landed on the island of
Panay in the Thirteenth Century and that soon thereafter Kali was taught to children as a part of their
basic education.
In the Fifteenth Century, Islam was introduced into the islands by Brunei and by the middle of the
Sixteenth Century there were two sultanates within the islands.
One of the first Western encounters with Kali is related by Pigfetta, the chronicler of Magellan,
who records how the Portuguese explorer lost his life on 27 April 1521 in a conflict with Chieftain
Lapu-Lapu. Although conflicting stories are told of a fire-hardened piece of Rattan being shoved
through Magellan’s breastplate, Pigfetta’s account tells us that a bladed weapon was used.
Several decades after Magellan met his untimely demise at the hands of a Kali practitioner, the
explorer Legaspi was given a more friendly demonstration of Kali when his ship landed in Abuyog,
Leyte in 1564. Legaspi founded the first permanent Spanish settlement in Cebu one year later. Had
the people of the Philippines realized that this was to be the beginning of 333 years of Spanish rule,
they may have given Legaspi the same manner of treatment that Lapu-Lapu had given Ferdinand
Megellan.
During the centuries of Spanish occupation, Kali was influenced by Spanish fencing methods.
The Spanish were none-too-happy with the Filipino love for Kali although its popularity is said to
have gone into decline as early as 1596. The Spanish complained that the Filipinos were so engrossed
in the art that they neglected their work in favor of training. They also complained that the training
methods were so violent and realistic that they often actually resulted in the loss of life.
By 1764, Kali had come to intimidate the Spanish to the point at which they found it necessary to
ban its practice. Although it was never eradicated, the practice of Kali was forced into secrecy. Only
the Muslims of Mindanao and Sulu (called Moro by the Spanish) openly defied the Spanish rule. It
was not until the coming of the United States Army and the 48 years of U.S. occupation that the warlike
Moro were brought under some measure of control. Even today as I write this, in the year 2004,
the United States still seeks to defang Militant Islamic terrorist groups operating in the traditional
land of the Moro. 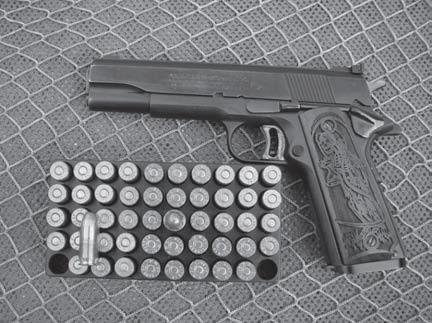 A modern variation of The Model 1911 .45ACP. (Automatic Colt Pistol). Almost one hundred
years after it was designed for the U.S. military, it still has the reputation with many as one of the most
effective combat handguns in existence. Many modern combat handguns chambered for this round
are in widespread use throughout the world.

The voracity of the Moro is perhaps best attested to by the fact that the United States Army was
forced to abandon its .38 caliber sidearm in favor of the more powerful Model 1911 (the year of its
adoption) .45ACP. The .38 caliber sidearm proved inadequate for the task of stopping a blade-wielding
Moro in sufficient time to prevent him from reaching striking distance with his blade. Vic Hurley
writes in his 1936 account, Swish of the Kris:
These Mohammedan wards of America have had a glorious history. As is so often the
case with a free, wild people, they have degenerated under the stultifying inhibitions of
civilization, but they still remain a mighty, militant minority in the Philippines.
In the proud bearing of the Moros is reflected the confidence gained by centuries of
warfare. With the Moro, courage is a fetish and when pitched to the heights of religiousfanaticism by
his Imams (A Secondary Priest or a religious leader) and Panditas (A Head Priest), there exists
no more dangerous fighter on the face of the globe.

The Moro loves the cold steel, and with his Kris, Barong and Campilane he carved an
empire in the Philippines that lasted for years. His capacity to carry lead in the heat of battle,
stamps him as a truly great fighting man. In his military history are found many references to
this almost unbelievable ability to remain on his feet, even when riddled with bullets.
The Moro was responsible for the change in regulations of the United States Army,
providing for the substitution of a .45 caliber pistol for the .38 caliber weapon formerly
carried as a sidearm. Experience in action against the Moro proved that the .38 caliber bullet
was incapable of stopping the fanatic in time to save the soldier who had fired the shot. There
were many cases in the stirring era of Kris versus Krag (The rifle used by U.S. forces)when
American soldiers were cut down by Barongs in the hands of literally dead Moros.
In 1893, the army decided in favor of a small bore side arm and an ordnance board called
for revolvers of .38 caliber to be tested for service use. The Smith and Wesson Company
entered a hammerless revolver and Colt offered a side-swing Model .38. In 1894, the Colt
was accepted by the government.
Smith and Wesson then developed a .38 Smith and Wesson Special that was also adopted
by the United States government.
These two guns were sent to the Philippines and to Cuba. In Cuba they proved effective,
but for Moro use they proved absolutely ineffectual. The War Department therefore recalled
the .38 caliber weapons and resumed the Colt .45.

The Barong is considered by some to be the national weapon of the Moros of Sulu,
Mindanao and North Borneo.

The Kris
The curved blade Kris cut a path of opposition to the centuries of foreign occupation of
The Philippines. This ancient weapon probably originated in Java. The people of the region
ascribed the creation of this blade to a 14th century king of Janggolo named Inakoto Pali. By
the 15th century, the blade began to appear in sculptures. In its various forms, this blade was
used throughout the Philippine Archipelago.

A modern reproduction of the Kris

In 1637 Roman Catholic Friars introduced a play called “The Moro Moro”. This play was a
dramatization of the war with the Muslim Moors and of the eventual triumph of Spain and of the
Christian Church over its Islamic foe.
It is from this play that the term “Arnis De Mano” most likely finds its origin. It is said that the
soldiers in this play wore an “Arnes”(Harness, archaic, “to array in armor or equipments of war”)
that somehow lent its name to “Harness of the hand” in reference to the fighting methods that were
once called Kali.

Modern Arnis is the name of the Filipino fighting system made popular by Remy Presas. Professor
Presas was perhaps one of those most responsible for popularizing the Filipino arts outside of the
Philippines. Ray Dionaldo was greatly influenced by Professor Presas in the formulation of FCS. Of
particular influence were the Jujutsu-like aspects of Modern Arnis and the concept of “The Flow”.
More will be said about this concept later.

The name “Kali” was by no means, exclusively used throughout the islands.
Alternate names for Kali in different regions
(The name of the group or region appears on the right)
Pagkalikali- The Ibanags
Kalirongan- The Pangasinense
Kaliradman- The Visayans
Escrima or Garote- The Cebuanos
Baston- The People of Panay and Negros Occidental
Sinawali- The Pampangenos

It could be argued that it is a question of semantics as to whether or not the various names given
to Filipino Martial Arts are different names for the same thing or conversely unique systems or subsystems.
In current terminology, most Filipino stylists refer to FMA (Filipino Martial Arts) as the
catch-all phrase for the various systems and subsystems.
Filipino Combat Systems is often referred to by its practitioners as “Kali”. This also is simply
semantics, as many systems and subsystems that are not generally called “Kali” are incorporated into
this system. Guro Dionaldo is always careful to give credit to all those who have influenced his art,
and thus chose “Filipino Combat Systems” as the official and most descriptive term for his art.